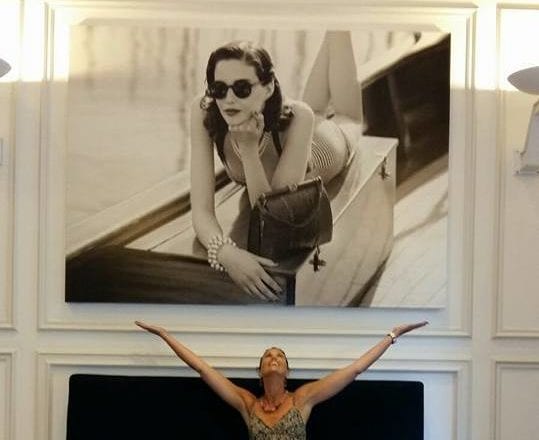 It’s not everyday that you walk into a hotel and find a picture of yourself hanging on the wall! That’s exactly what happened to me in Barcelona when I stepped into the foyer of the Granvía Hotel on Gran Vía de les Corts Catalanes.

Hung up (on the wall) at the Granvía Hotel, Barcelona

My husband and I were vacationing at a seaside village just 40 km from Barcelona and my cousin and his wife were in the city at the same time. We met them at the Cotton House Hotel where they were staying and had drinks on the terrace at the very stylish rooftop cocktail bar.

After catching up over a couple of glasses of Cava, we decided to venture out to look for a tapas bar where we could fill our bellies with some pan tomat and jamón.

As we walked down the street, an elegant liberty style door caught my eye. It was the entrance of the Granvía Hotel. The windowpanes were impeccably transparent, and the dark wood beautifully framed the all-white interior. Curiosity got the best of me and I was drawn inside.

To my surprise, on the right side of the entrance was a three-meter black and white print of… me!

“Hanging out” in at the Granvia Hotel in Barcelona

It was a photo from a fashion shoot I had done with Sweedish photographer Maria Espeus in the early 90’s. A tribute to 1930’s Hollywood starlets, the photoshoot featured bathing suits by designer Guillermina Baeza. The shoot was done on a private yacht at the port of Barcelona. It was first published as an editorial spread in Vanguardia Magazine under director Manuel Outumuro.

In a furry of astonishment, I called out to the others who had already made their way down the street. I called out, “You have to come back, look at this!” They shooed me, “Come on, we’re hungry!”

Finally, they came back and I pointed to the photo.
My husband looked at it and not understanding said, “What?”

“It’s..it’s…oh! ..It’s you!” Then the shock sunk in. He started telling people walking into the lobby, “Look, it’s her!” My cousins stood in disbelief of the unreal situation.

We all entered, and as we walked around the lobby and sitting lounge, we saw another photo taken during the same photoshoot. It was quite a pleasant surprise.

Maria Espeus was already an established photographer working for Vogue, Time, The New York Times,  Elle, Marie-Claire, El País, La Vanguardia, and more. Her work is shown in galleries and museums around the world. See more photos from her Summer Luxury collection.

A surprise at the Granvía Hotel Barcelona

I haven’t stayed at the hotel but it looks absolutely divine. It is centrally located near Passeig de Gràcia where much of the Gaudì architecture can be found. Las Ramblas is walking distance and public transportation is easily accessible.

My husband and the photo of me at Granvía Hotel Barcelona

A picture of me hanging at Granvía Hotel Barcelona

Editorial correction: a previous version of this article attributed the project to Outomuro, when in fact, Maria Espeus  was the photographer and Outomuro was the magazine director at the time.