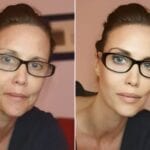 In ancient Roman times both men and women wore something red as a symbol of power, fertility, health and wealth.

Men typically wore a toga, and women wore a stola. A woman’s stola was a dress worn over a tunic and was usually brightly colored. A fibula (or brooch) would be used as ornamentation or to hold the stola in place. Frescos and mosaics preserved throughout Italy and at sites such as Herculaneum and Pompeii depict gods, goddesses and nobility wearing red. In fact,”Pompeian Red” is even a Pantone color (PANTONE® 18-1658 TPX).

Chinese tradition also reveres red as a color which brings luck and prosperity, usually worn at weddings to wish the newlywed couple good fortune. According to Chinese mythology, the Niàn, the man-eating beast can be warded off by loud noises, fire, and the color red. It became custom to wear red and place red lanterns in the window to send away evil spirits.

Valentino is the Milanese designer most associated with the color red. As a youth, the designer visited the Barcelona Opera House and was struck by the colorful statuettes and lush, red curtains. Trying to create the richness and beauty, he mixed his own color. Today, “Red Valentino” is a trademarked color.

Although you would look fabulous, you don’t have to wear an evening gown to follow the Italian New Year tradition, a red accessory or accent will do!

What to Wear on New Year’s Eve

Wishing you all a happy, healthy and prosperous New Year!

You may also be interested in this from Easy Milano:

Don’t Believe Everything You See on Internet