There is no doubt that Milan is one of Europe’s most expensive cities to live in and to visit, but what a lot of people don’t know is that there are a lot of free ways to enjoy Milan. Milan is a city known for fashion, shopping and for being the financial hub of Italy. Located in Lombardy, the most northern region of Italy, it is also one of Italy’s most modern cities. If you are visiting Milan on a budget, then you will love this list of Free Things to Do in Milan.

Some of the most beautiful things to do in Milan are FREE!

My favorite free things to do in Milan:

Read on for more ideas of free things to do in Milan.

Also known as “il salotto di Milano” (Milan’s drawing room) the Galleria Vittorio Emanuele II is not only a tourist attraction but also a hub for business and commerce.

Galleria Vittorio Emanuele II is one of the most beautiful, covered galleries in Europe. Began in 1865, it was the first of its kind to make use of an iron and glass structure.

The glass dome in the center and the mosaic flooring are special and unique and certainly worth a visit. Beneath the central dome, there is a mosaic of the Turin coat of arms featuring a bull.  Spin 3 times on your heel on the testicles of the bull for good luck.

The Cimitero Monumentale (“Monumental Cemetery”) is one of the largest cemeteries in Milan, Italy. It is the resting place for many famous and historical figures. The artistry of the tombs and monuments make it a public, open-air museum.

Since it’s opening in 1866, famous artists were often called to design the tombs of politicians, industrialists, authors, entertainers and Milanese high-society. Artwork by artists such as  Adolfo Wildt, Giò Ponti, Arturo Martini, Lucio Fontana, Manzù, Floriano Bodini, and Giò Pomodoro can be seen on the grounds. Most impressive are the majestic marble entrance and Alessandro Manzoni’s tomb.  Guided tours of Cimitero Monumentale are available but to enter is free and you can walk the grounds and visit it on your own as well.

The Duomo is the main attraction in Milan. The Milan Duomo is the third largest cathedral in the world after St. Peter’s in Rome and the Cathedral of Seville. It has almost over 3500 statues, gargoyles, spires and carvings decorating the gothic edifice. The rooftop terrace offers one of Milan’s most spectacular views. To visit the Duomo and rooftop you will need to purchase a ticket, but there is another way to see Milan’s most beautiful church.

All churches in Milan are free to enter for prayer.  At the Duomo there is a separate entrance for prayer. You must be respectful; you may not walk around and take pictures. Guards watch over the prayer section and will escort you out of the church if you do not follow the rules. If you want to walk around and take photos, you must pay the tourist entrance fee. It is customary to leave a donation when visiting a church in Italy.

Piazza San Fedele is a nondescript city square in the Milan historical center. It’s a large open square with a statue of Alessandro Manzoni and stone benches. It’s the perfect place for people watching. The Milanese use it as a short-cut to cross from one side of town to the other and lovers use it as an out-of-the-way meeting point.

It’s fun to sit on a bench and make up stories and scenarios of the people passing by.

Even if you have no intention of buying anything, it is a great area to walk around, window shop and soak in the elegance of the Italian fashion scene.

Castello Sforzesco dates back to the 14th century and in 1450 was named after Francesco Sforza, who transformed it into a ducal residence. To visit the Sforza castle museum you must pay a small entrance fee, but the grounds, and courtyard are free to roam around as you wish. Don’t miss the moat surrounding the castle and the outdoor exhibit of artifacts, columns and statues in the courtyard. The museum holds treasures such as Milanese artifacts, mediaeval weaponry, tapestries and beautiful artwork in the residential rooms. On the ceiling of the ducal room Sala delle Asse, you will find a fresco by Da Vinci. In a secluded room at the far end of the castle, you can have a moment of reflection with Michelangelo’s Pietà Rondanini, an unfinished marble sculpture, which is said to be the last piece he worked on before his death at age 89.

Parco Sempione found on the north end of the castle was once Sforza’s private hunting ground. It was gated off and animals were imported for him. In the late 1800’s, the Milan municipality redesigned it as a public garden. Today it’s a popular place for sports, families and romantic walks. Parco Sempione holds treasures of its own, such as the Mermaid Bridge, and the Milan Aquarium.  There is a structure called the Teatro Continuo (Continual theatre) a tiered semi-circle amphitheater where you can usually watch percussion groups pounding on their congas.

Frog Walking Tours offer FREE tours. They are a group of licensed tour guides and experts in geography, history, tourism and languages with a passion for Milan. Tours can be planned privately or in small groups and do not have a set price. Guides earn from the tips you offer them, so be generous!

If you are looking for things to do in Milan, Free Frog Walking Tours are a great way to meet locals and learn about the secrets and hidden history of Milan.    www.frogwalkingtour.com

LOVE , commonly known as “Il Dito” (The Finger), is a sculpture by the Italian artist Maurizio Cattelan located in Piazza degli Affari in front of the Milan Stock Exchange building. Originally expected to be on display for only two weeks, the city council decided to keep it as a permanent work of urban art.

Naviglio di Milano is the area where the old canals still run through the neighborhood. Milan once had a maze of canals running through the center of the city. Many were covered over during Mussolini’s reign.   Legend says he wanted Milan to look more like Berlin, so the canals were filled in with cement.

The canals, cobble stoned streets and small bridges make Navilgio one of Milan’s most charming neighborhoods. There is a lively café and pub culture, especially in the summer. Weekend markets fill the lanes with antiques, flowers and artwork.

Apart from the Golden Quadrilateral, there are lots of great shopping areas in Milan. Corso Buenos Aires has high-street ready to wear, Via Torino too. The Isola and Corso Como areas are full of small shops and artisan workshops and the Naviglio, canal district, hides secondhand shops and bohemian style boutiques.

After a renewal and gentrification project of the Porta Nuova district and the areas surrounding the Garibaldi Station, the entire area of town is now a modern, urban development. Gae Aulenti Square is a central focal point of the new neighborhood. From here, you can see the buildings that make up the new Milan skyline; Unicredit Tower, Palazzo Lombardia, Torre Solaria, Torre Diamante and the Bosco Verticale.

Biblioteca degli alberi (Library of Trees) is a public park just behind Piazza Gae Aulenti square in the Isola district. Found adjacent to Garibaldi Station within the triangle made by the three roads, Via M. Gioia, Via De Castillia and Via Sassetti.  It’s the third largest green area of Milan occupying 9 hectares and hosting more than 100 different species, 500 trees arranged in 22 rings and 135,000 plants. A labyrinth of paths, plants and bushes with sitting areas, the Biblioteca degli alberi is a great place to sit, read or meditate on a sunny day.

The Gates of Milan

The center of Milan was once surrounded by walls. Built by the Romans, some were destroyed in the middle ages by Barbarossa and then others were rebuilt when the Spanish took reign in the 16th century. Majestic, guarded gates protected entrance into the city. Some remnants of the walls and gates remain and can be visited.

More relics and artifacts of ancient Milan can be found at the Sforza Castle Museum and the Museum of Archeology.

Free things to do in Milan with MilanPass

In 1210, when an adjacent cemetery ran out of space, a room was built to hold bones. The San Bernardino alle ossa chapel is decorated with Baroque style motifs, all made of human bones. The address is listed as Via Verziere, 2 but it’s actually down a side street and in Piazza Santo Stefano. The church and chapel are free to visit, but it is customary to leave a donation when visiting churches in Italy.

Designed and constructed by architect Ulisse Stacchini (who also built  Stadio San Siro /Giuseppe Meazza), it is said the original inspiration was Union Station in Washington, DC.  The Milan Central Station is a majestic structure of marble and steel. Long canopies cover the 24 platforms and tracks of the incoming trains. Benito Mussolini became Prime Minister in 1922, and had decided that Stazione Centrale should become  an icon of the fascist regime, therefore some embellishments and changes were made, resulting in the overwhelming building it is today. The station is not all Fascist;  Liberty and Art Deco motifs can also be admired in the marble tiling, mosaics, wall sculptures and lighting fixtures.

A peaceful oasis in the center of Milan, Giardini Pubblici Indro Montanelli (Indro Montanelli public gardens), is located in the Pt. Venezia area. Originally the gardens of Palazzo Dugnani which now houses the Natural History Museum, it is a park with open fields, hidden duck ponds and trees offering shade and tranquility. A lion’s cage stands empty in one corner of the park, a forgotten relic of the Milan Zoo which was closed in 1992.

Don’t forget to take selfies! If you share your photos on social media use tag @milanostyle_com!

These are just a few ideas for visiting Milan on a budget. There are many more free things to do in Milan and this page will be update periodically, so stay tuned and subscribe to the MilanoStyle.com newsletter.

Luxury Ready-to-Wear Brands Made in Italy What Milan Is Made Of 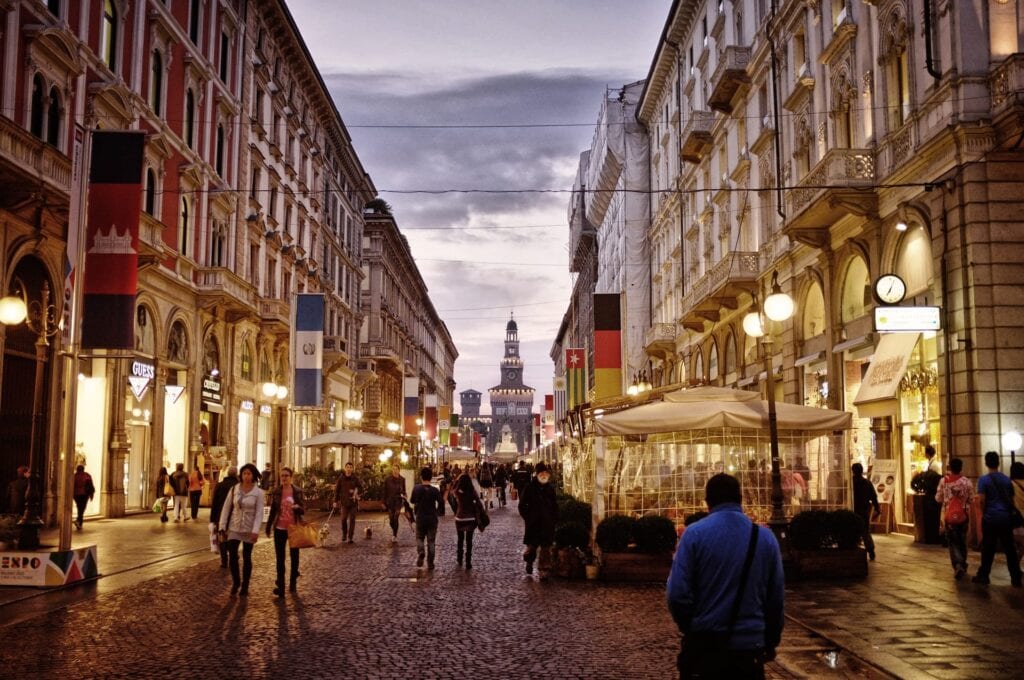