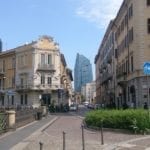 Milan, February 13, 2021 | About 10 thousand square meters of new greenery arriving at the Portello. Work began this week for the completion of the Alfa Romeo park, in the fourth and last lot between Viale Serra and Viale De Gasperi. The intervention is part of the Portello Integrated Intervention Plan, which is headed by Iper Montebello Spa, which also built the other lots in the park.

The project conceived by Charles Jencks and Andreas Kipar and developed by LAND Italia, will thus complete the green lung that extends along viale Serra, between via Traiano and viale Scarampo, intervening in continuity both from a landscape and perceptive point of view and thus bringing the park to a total extension of approximately 73 thousand square meters. A new access to the park will therefore be created which guarantees the connection with the remaining one, integrating into the overall design as regards the choice of materials and plant essences.

“This intervention will finally bring to completion a park of high quality landscape, going to redevelop an unused space – declares the Councilor for Urban Planning and Green Pierfrancesco Maran -. We are in an area of ​​the city that has developed a lot in recent years, and the Alfa Romeo park has become the heart of the neighborhood. This is the logic of all the urban interventions in the coming years that will see the birth of at least 20 new large parks in the city: green must be the engine of development ”.

The shape of the park was inspired by Athanasius Kircher’s “Phases of the Moon” diagram, where the lunar cycle is represented as a double spiral, for both terrestrial hemispheres. An uphill spiral path will then be created with shaded rest areas with benches. Fifty trees among maples, lyriodendrons, limes, mulberries and sofore will alternate with 1,500 square meters of colorful flower beds with herbaceous and shrubby plants and groups of rhododendrons, integrating the existing essences.

The main paths will be made of concrete while the central square has been designed with concrete flooring. The project involves the construction of a retaining wall made at right angles starting from the end of the existing one overlooking Viale De Gasperi and set with decorative elements. Along the Viale De Gasperi counter-avenue, on the right side of the carriageway, the car parks will finally be traced, in order to make parking tidy. The works will be completed in autumn, when the last part of the park will also be accessible to citizens.

Make a Home Gym for Under 240 euro

An International Student’s Experience in Milan Driving and Parking in Milan