The Joyne Playce experiential tour of Cividale del Friuli started early in the morning, so I had planned to arrive the day before. I ran into a few obstacles getting there but was pleasantly surprised by the treasures of this ancient city.

The day I went to Cividale del Friuli, there was a train strike. Train travel in Italy is fantastic, but I’d be lying if I said that train strikes in Italy are rare. When they do occur, they are usually announced with short notice and take place during peak travel hours. The train from Milan to Udine was running, but local trains after 4 PM had been suspended. Everything seemed to be working against me; a train strike, hot summer weather and my phone battery was dead. Despite that, I found friendly faces and helpful smiles to point me in the right direction. Busses were running and I had about an hour to visit Udine where I spent time by taking photos of the Udine urban landscape.

The bus followed a two-lane country road through fields and wine vineyards. A church steeple would pop up every few miles and in the distance, small villages dotted the countryside.

Once arriving at Cividale del Friuli I had expected a quaint little town and was surprised by the modern looking shopping center outside the station. I followed the signs pointing toward “centro” looking for hints to confirm that I was in the right place. I followed Via Monsignore Liva through a neighborhood of 1960’s style apartments, then little by little the architecture started changing. Early 19th century buildings with wrought iron window frames and arched doors, stone sidewalks and a stunning bronze statue of a woman standing in a dramatic theatrical pose told me I was getting closer to the historical center.  Later, I found out the statue is of world-famous actress of the late 1800’s Adelaide Ristori, who had been born in Cividale del Friuli.

In my meanderings, I had gone too far, so I tracked back and finally found my way to my accommodation, the Locanda al Pomo d’Oro in Piazza San Giovanni. It was centrally located just steps from the lively Piazza Paolo Diacono, a central meeting point with outdoor cafes, pubs, restaurants and boutiques.

I was excited about the tour planned for the next day but also anxious to explore. What I wanted to do most was walk around and maybe even get lost. 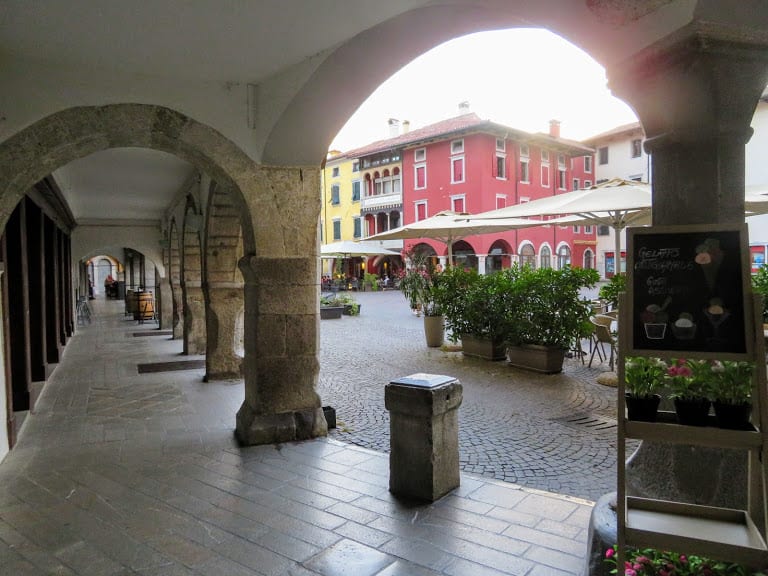 I followed the cobbled stone lanes to the Piazza. The lanes are beautifully paved in masonry stone set in gracious arch designs known as Sampietrino. Straight blocks of stone bricks delineate a sidewalk and sometimes small cars zip through the lanes, forcing pedestrians to duck into doorways. 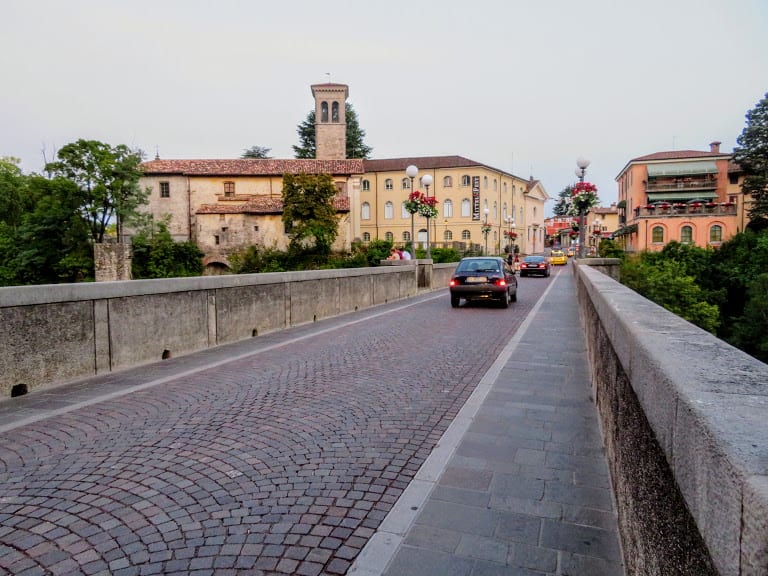 The streets of Cividale del Friuli are beautifully paved with Sampietrino masonry work.

A rectangular street sign with a worn-out white arrow indicating  “Ponte del Diavolo”, the Devil’s Bridge, captured my curiosity and I had to follow suit. I walked through more of historical Cividale del Friuli, past the Duomo cathedral, the archaeological museum, city hall, and a bold monument of Julius Cesar. 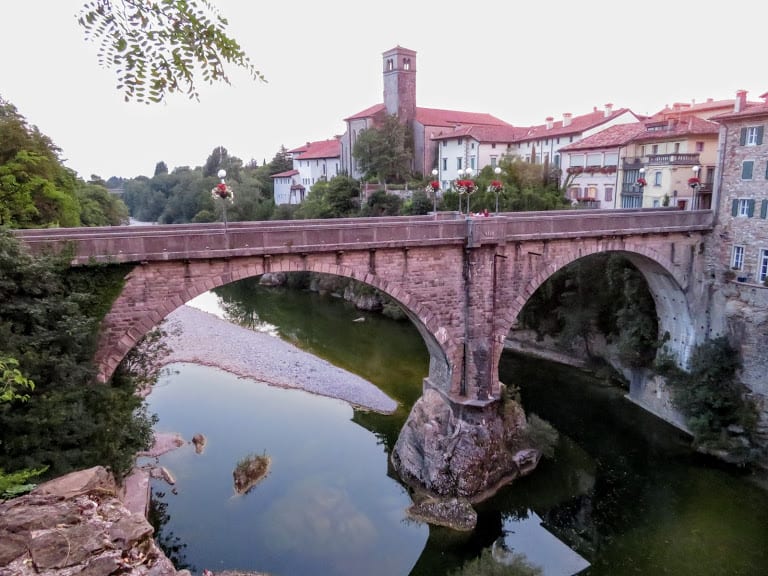 I walked along the lane until arriving at the 15th century bridge. I saw a couple standing against a rail above on the hill, so I followed the path leading up to a small cul-de-sac which opens to a terrace where you can fully appreciate the bridge. The bridge crosses over the Natisone River, although it has suffered the effects of climate change and is not the strong flowing rush it once was, the calm water beautifully reflects the pink hues of sunset and the strong, circular arch design of the bridge.

The bell tower, flower clad balconies and low terracotta roofed buildings are quintessentially Italian, but I had the feeling that there was something unique and different about Cividale del Friuli. Something ancient.

Archaeological findings reveal that the area was inhabited in Paleolithic and Neolithic times. During the Iron Age the region was settled by Veneti and Celts. In 50 BC Roman troops led by Julius Cesar settled and established a military camp here which later expanded into a city.  In ancient times, “Cividât”, meant city or municipality in the local dialect, and the Roman camp was known as “Forum Iulii” hence the modern name as we know it today; Cividale del Friuli.

While part of the Byzantine empire, in 568 AD the Lombard King Alboin invaded the region and the city was made the new capital of the Lombard Kingdom. The Lombards reigned until 774 AD when the city was overrun by the Franks. Cividale del Friuli underwent changes in rulers and name changes throughout the middle ages up to 1420 when it was annexed to the Republic of Venice. It wasn’t until 1866 when Cividale del Friuli was relinquished to the Kingdom of Italy. (Italy later became a republic June 2, 1946) The charming lanes of the Lombard Quarter near the Duomo

This rich history and the Lombard legacy not only put Cividale del Friuli on the UNESCO World Heritage list but it has also become a key destination for travelers looking for alternative travel itineraries, away from the mainstream touristy destinations.

After I watched the sun set behind the church bell tower, I was getting hungry and started walking back towards the central area where my hotel was. Not knowing exactly where to go, I turned to Tripadvisor and looked up the best restaurants in Cividale de Friuli.

I ate a beautiful meal Al Monastero, Via Adelaide Ristori, 9. I started with a Porcini mushroom flan followed by Cialcions del Monastero, ravioli stuffed with spinach, raisins and smoked ricotta accompanied by a glass of Ribolla Gialla sparkling wine made by the local winery La Buse dal Lôf. The second day of my trip I met Giovanna Tosetto, expert local guide and historian and learned more about the history and got a chance to meet and talk to the people of Cividale del Friuli. Giovanna runs an experiential tour of Cividale del Friuli where travelers can become a Travel Blogger for a day. With a special “press pass”, guests have privileged, behind the scenes access with a guided walking itinerary throughout the city learning about the history, meeting artisans and shop keepers and trying the foods and wines of the region. At the end of the day, the guest travel bloggers create a photo presentation for members of the local city council.

Sign up for my newsletter for updates
Milanostyle.com – No spam, just glam.

How to get to Cividale del Friuli

Cividale del Friuli is located in the Friuli-Venezia Giulia regione, Province of Udine. An excellent destination to add to your travel plan after visiting Venice, Trieste, Udine, or Gorizia. It’s close proximity to Slovenia and Croatia makes Cividale del Friuli a great starting point for a multi-cultural itinerary.

Getting around Cividale del Friuli

What to visit in Cividale del Friuli

Many thanks for the hospitality and experiences provided by the city of Cividale del Friuli, Friuli Innovazione, the ATLAS Interreg program of Interreg Italy – Croatia, and Artès Travel.

How to eat Cachi (Persimmons)

7 Ways You Can Save Money When It Comes To Fashion 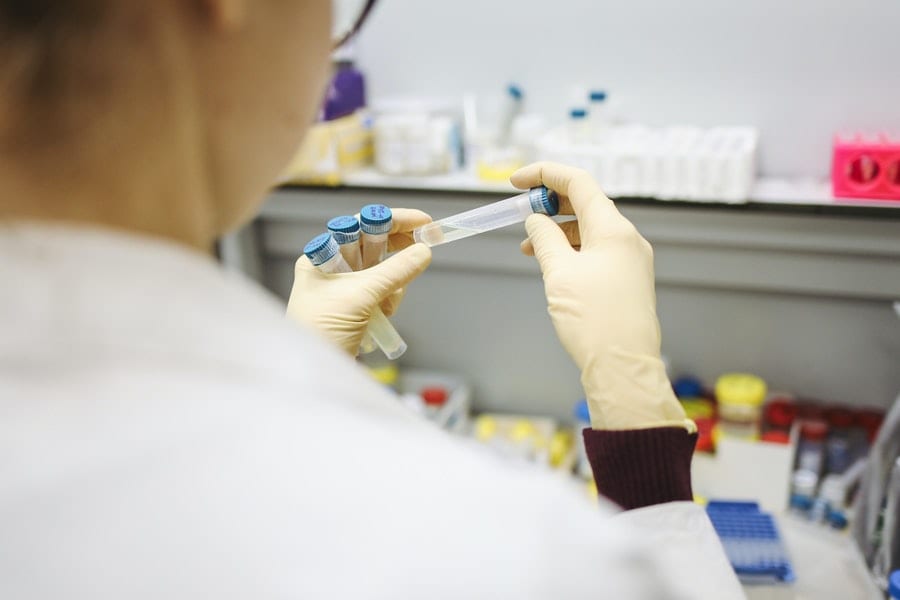