There are three elements that distinguish iconic Italian design: humble beginnings, hard work and innovation. The artisans of Italy are world renowned for their detailed, handcrafted skill and design. Italian furniture manufacturing and interior home design are highlighted at the Salone de Mobile hosted every year in Milan where thousands of visitors come to see the exhibitions of design week.

In 1923, Antonio Calligaris opened a small artisan carpentry producing the traditional “Marocca” chairs, a typical straw chair of the Friuli-Venezia Giulia region. They later expanded their collection to include upholstered furniture.

In the 1960’s the company industrialized with the first automatic upholstery machine which reduced the processing time of two hours down to one minute and 40 seconds. By the 1980’s they were producing 1500 chairs per day.

When the third generation of the Calligaris family took control, design production expanded beyond chairs, to tables, beds, sofas, furniture and furnishing accessories. Today there are store locations and showrooms all around the world including London, Paris, Munich and Los Angeles.

It all started with an oversized, overstuffed leather armchair. Renzo Frau founded his workshop in Turin in 1912. After having worked abroad in the UK, inspired by the Chesterfield armchair, Frau returned to Italy and opened a workshop producing his own Italian style interpretation. His designs soon became centerpiece furnishings in luxury hotels, cruise liners and for the Royal Palace of Savoy. Poltrona Frau prides itself on its tradition of craftsmanship excellence and has been an iconic Made in Italy brand for over 100 years.

The design house is not only well known for fine furnishings, but Frau leather is considered the highest quality leather and has even been used for Ferrari automobile interiors.

Kartell was founded in 1949 by Giulio Castelli, a chemical engineer who thought plastic could become an innovative element in the world of home design. Kartell, a Made in Italy brand based in Milan was the first Italian company to use polycarbonate for everyday objects and furnishings. The transparent furniture line has been produced in several variations, styles and colors.

In the early 1990s the company was transformed into a leading Italian design house by Castelli’s son-in-law, Claudio Luti who had worked with Versace and introduced Kartell to a new pop-culture and fashion audience. In 2002 at the Il Salone de Mobile furniture fair, Dolce & Gabbana ordered 50 new Louis Ghost Chair designed by Philippe Starck for their show rooms and Karl Lagerfeld bought 70 to furnish the salle de bal of his Hotel Particulier.

At the young age of 19, in 1959, Pasquale Natuzzi opened his first workshop in a 9m2   workspace, in Taranto. With the help of three other artisans, they built sofas and armchairs for the local market.  In 1962 he expanded and moved to Matera but later had to leave after a fire destroyed the entire factory. The company was transferred nearby to Santeramo in Colle, where the group’s headquarters are located today.

In the 1970’s Natuzzi made its debut at the Bari Furniture fair where buyers from the Middle East and Americas made Natuzzi Italia a sought-after Italian design brand.  Natuzzi sofas, armchairs, furniture and furnishing accessories have defined style and comfort in Italian homes for over 60 years.

Founded in Pesaro in 1961 by cabinet makers and brothers Valter and Elvino Scavolini, the Scavolini name has become synonymous for high-end kitchen design. Scavolini was the first furniture manufacturer in Italy to advertise using mass media television in Italy. Their successful ad campaigns throughout the 70’s and 80’s during prime-time evening variety shows featured celebrity testimonials. The familiar slogan “Scavolini, la cucina più amata dagli italiani” (Scavolini, the kitchen most loved by Italians) is a mainstay of Italian pop-culture.

If you love design or want to make your home more “Italian style” these designers exemplify the three elements; humble beginnings, hard work and innovation that make a Made in Italy brand.

Calligaris, Poltrona Frau, Kartell, Natuzzi Italia and Scalvolini all have flagship stores throughout Italy, but the best place to find them all in one location and with up to 70% savings is at Scalo Milano Outlet & More.

The Scalo Milano outlet houses the largest European Design District with 15 mono-brand showrooms, in addition to to over 150 fashion stores.

Shipping abroad or local delivery can be arranged for all purchases at Scalo Milano Outlet & More.

Located just 15 minutes from the Milan city center, get there by Free shuttle service or the S13 railway link which stops in front of the outlet at the Locate di Triulzi station.

See a complete list of Fashion and Design Stores:
https://scalomilano.it/en/stores/ 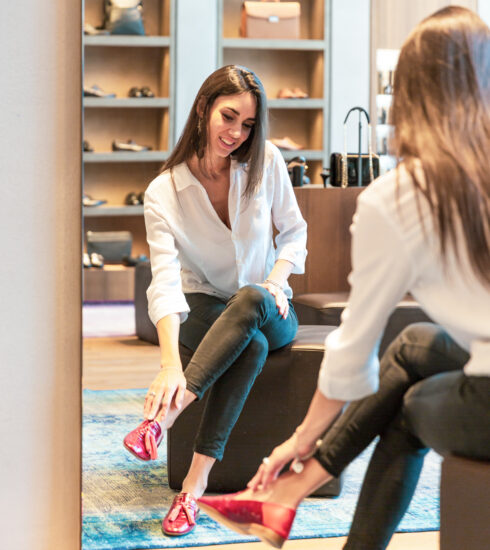